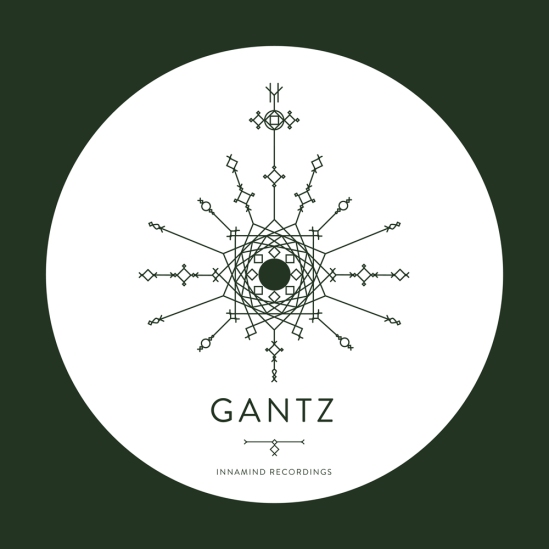 Innamind Recordings has been one of the recently founded (2011) imprints that has taken the underground dance scene by storm, specifically with regards to dubstep.  With a discography showcasing artists like Perverse, Catacombs & Knowledge, and Nanobyte, the third installment of their vinyl had a mighty reputation to uphold.  Label-boss Jeremy Pattison drew for just the right weapon with his signing of Gantz.  Quickly taken under by Thinking for the Box Clever imprint last year, Gantz should be no stranger to any of your ears.  Both of his tracks ‘Catalyst’ and ‘No Faith’ were, and still are highly regarded by heads throughout.

For his sophomore physical release, Gantz again shows his knack for blisteringly concise percussive abilities alongside obscurity and eeriness within his atmospheres.

This beat unfolds in a proper shuddersome fashion, with dissonant pads that set the stage for an abrupt attack of drum grooves and sub-bass swing.  The careful placement of his bongos compliment the overall aesthetic of this beat quite nicely.

No question this is my favorite track off the release.  As the intro provides a seemingly junglist vibe with diamondback-esqu (the snake) rattles and slowly-decaying synths I couldn’t help being reminiscent of the old-school raves I used to attend.  The scattered stuttering of his kick drums, beautifully chopped vocal processing, and flawless placement of his tribal percussion creates an extremely smooth listening experience that can tear up just about any venue, be it a dark warehouse, sandy beach, or bedroom skank session.

The release is currently available through Chemical and Surus, both of which are linked below for those wanting to pre-order (will ship February 1st):

For the digital heads, the release should be available at all fine retailers (including the above links) so mark your calendar to pick this one up on Monday, February 4th!

Stay connected with Gantz and Innamind Recordings below: