“Ipman has established himself as a force to be reckoned with over the last couple of years, bringing a lethal combination of unfaltering creative freshness and no-nonsense soundsystem pressure to the table. His music is held in high regard by Kryptic Minds, and this August sees them welcome Ipman to the Osiris Music UK crew to drop two blackened cuts of bruising tech-edged weaponry for the imprint’s 32nd release. The results are unreservedly dark and punishing, with ‘Persistent Dread’ driven by hypnotising sub bass body-blows that punch beneath a jagged swell of menacing sound design and mazing glitch melodies. The flip features the fierce rolling beats of ‘Signal Motion’, a lurching stomper that hits hard with chest-caving intent; deft snarls of mechanised snyths and titanium-grade kicks accent waves of deep dread frequency. A monstrous debut Osiris 12 from Ipman” 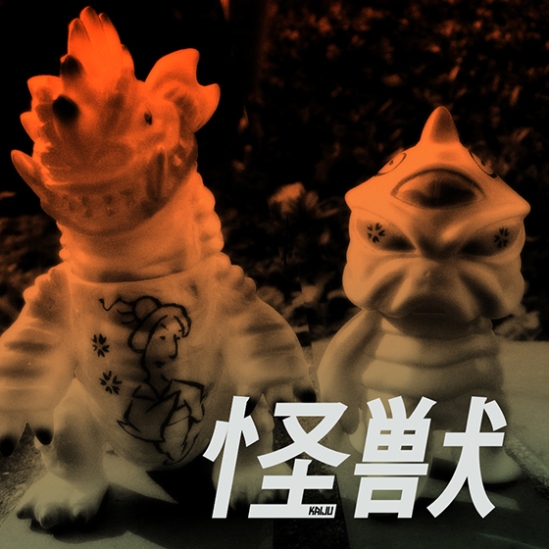 Kaiju:
Signed exclusively signed to Osiris Music, these two have been shaking up cobwebs with some support from big bass rattlers such as Kryptic Minds, Youngsta, Vivek, Thruth, N-type, Distance, J@kes, Phaeleh, Biome, Thelem, Commodo and the list goes on. That’s some very nice company to keep if you ask me.

Since all those big names are already in the know, we figure it’s time to share some join and spread the word for Kaiju as many more of these fine tunes are sure to surface when they are at the helm. Enjoy this FREE exclusive download of their track Monsters, and peep all the links below. These guys will turn concrete into dust!”

Make sure you show your love for Kaiju!  Stop by one of their pages and drop them a line for the free download.  Seriously big things brewing for these two badmen in the future.

EZ everybody.  I don’t about you lot, but this week is killing me already.  I can’t wait for Friday to be here!

To finish off the month we have a very special interview and guest mix from Matt Weare, aka Thelem.  It would be surprising if any of you hadn’t heard/seen this name on the late, the man has been climbing the ranks within the underground quite steadily.  Harnessing a multitude of platforms, ranging from a radio show on Rood.FM to operating his own label (Orientis Recordings), Thelem has been steadily spreading his sound among those involved in the deeper sound scene.  From his intricately arranged cinematic productions to his booming tribal drenched dance floor rhythms, Matt is a force to be reckoned with – a statement backed by support from some of the scenes most prolific figures, like Kryptic Minds and Youngsta.  Despite the rather massive nature of his music, Thelem keeps his head on his shoulders and his ego on lock.  With all of the controversy that has been surrounding dubstep the past couple of years, this is a characteristic that I have the utmost respect for.  People claiming one thing is or isn’t dubstep, generalizing geographic regions, hailing themselves as “the last true stepper”, it has all gotten out of control.  To see that there are still people out there who just do their thing while the madness plays out, well, it’s a breath of fresh air.  There are MANY producers out there like this, but many more clowns.

So, in the midst of Thelem’s debut release on Osiris Music, we had a chance to grab some words from this badman about his recent releases and thoughts on running a label…

1.  Ez Matty, thank you for taking the time to give us this interview, much respect.  Just to get the formalities out of the way can you give the readers a quick background about yourself?
.
Ez, my name is Matt, I’m from the UK, I produce and DJ under the alias Thelem.
.
2.  From what I’ve seen you’re a pretty humble guy, generally keeping to yourself when it comes to opinions about any topic occupying threads among dubstep listeners.  Is this something that you set out to do?  Or is this just your personality type?
.
Well Generally I’m pretty mellow I guess. I have my own opinions about certain things I see online, but I’m the type of person that doesn’t get involved in arguments and online debates. I’m also not a big fan of arrogance, so I guess it’s more in my nature to be humble.  I don’t get some people who act like superstars when what we do is just underground dance music.
.
3.  You launched your record label, Orientis, early last year (if I’m not mistaken), showcasing the up and coming talents Killa & Instinct, Antics, and Subreachers, alongside your own productions.  Are there any newcomers that you plan on introducing this year?
.
Well sadly I have decided to close the doors on Orientis and call it a day. Mainly due to the fact of the time and cost required for running the label. I lost alot of money in the initial stages through the fault of an old distributor, so it was hard to ever come back from that and regain the money.  I thought instead of stressing and worrying, it would be better to focus more time and energy into other things. It wasn’t all a waste of time though, it was definitely an eye-opener and good insight to how it all works.

4.  In your Hedmuk interview last year you spoke of the importance a vinyl release has to you – hence the vinyl only release nature, but due to the changing landscape of the scene you intended on catering with more digital releases.  I know that late 2011 saw the ‘Angles’ compilation, which was purely digital, but have your thoughts changed at all about the format in which you will choose to release?  Especially given the quite consistent rise in vinyl sales the past couple/few years (depending on who you talk to) has seen?
.
I still think that vinyl releases play an important role to me.  It’s nice having that physical element of the hard work that went into making those tunes. Looking back when your older it’s going to be nice seeing what you achieved through your career with that physical format.  Apart from that, I also think a label that does vinyl as well as digital will tend to stand out more, so I think its good for the interest of the label and the artist. However, in my opinion it’s not just about vinyl either, it’s important that labels release digital copies of the release as I think they would miss a large target audience in not doing so.

5.  We recently saw your debut release on Black Box, Kaba/Point of No Return, which was another quality project with Killawatt.  What a release!  After Swarf, Dualism, and BLKBOX009 (among many others I’m sure) you two have carved out to be quite the team.  How did you guys become acquainted with each other?
.
Like most people that I have met in music, it started from chatting online, through Facebook or AIM, etc.  Back when I first started chatting to Killawatt he was pretty local to where I lived, like 20/30 minutes away, so we decided to meet up and get on a beat.  It all went from there really and we continued to work on collab productions.
.
6.  Just recently got news about your debut release on Osiris music.  Congratulations on that one bro!  That’s quite the feat considering the selective nature of the label.  What was your reaction when first receiving this news?
.
I was really stoked to be honest. Osiris has been one of my favorite labels for a while so it was huge step being able to release on them.

7.  The detailed nature in the atmospheric elements of your music is something that really caught my attention when first introduced to your productions.  Do you have any background education in cinematic or soundscape design?
.
Nah I never studied anything like that, I guess self taught through my own productions and experimenting really. I do love atmospherics though, to me they help build the character of a tune, much like they do in film I guess. I like sci-fi / darker films and atmospheric soundscapes play quite an important role in them, so maybe that’s where it all stems from.
.
8.  I believe you’re part of the Rood.fm family.  I lock in as often as I can to catch the various shows.  What’s it like to host a radio show?  How large of a factor would you consider the radio show, as far as getting your music out there to be heard?
.
Sadly I’m no longer part of Rood.fm, I haven’t done my show on there for quite a while.  I had done it for about a year and I felt like a change was needed, it was time to move on and let someone else take the slot.  My show was not very popular, so I guess it didn’t really play a role in getting my own tunes out there, it was still fun at the time though.
.

10.  What should the readers be on the look out for in the future?  Shows, forthcomings, etc.?

Well I have just done a remix for Kryptic Minds, hopefully you should hear about in soon, so keep your ears to the ground for that.  As for releases I have another Osiris release lined up that should be out in the not too distant future.  Booking wise you can find me in Lincoln and London, then Killawatt and me are heading to the States for a mini USA tour that I’m really looking forward to.  Then from there it’s off to Outlook festival, that’s about it for this month.
.

Big ups in taking the time to read this, enjoy the Mix!

That’s all for today fam’.  Hope you enjoyed the read!  Below is a mix that Thelem built to accompany this interview.  Some seriously wicked tunes inside this mix, all beautifully blended.  Make sure you stop by Thelem’s page and show him some love!

Catch ya’ next time.