To say that I’ve been frantically anticipating the release of this EP would be a vastly immense understatement.  With it’s original release date set for December 21st of last year, it’s been exactly one month of constantly waiting to see this one hit the shelves.  Tunnidge has always been one of most successful proponents of the ‘stripped-down’ approach to song writing and this most recent release with the emphatically idolized Deep Medi imprint displays three perfect examples of this type of production.

The track bearing the release title establishes a precedent of ominous synths and panning undertones that could easily disorient the faint of heart.  As always the fierce drums that have become a staple of Tunnidge’s sound are very apparent throughout the beat, namely (at least for me) his kicks and hat work.  I couldn’t imagine a track better-suited for the title.

This beat is without a doubt my favorite off the release.  Immediately the atompheres caught my attention as my mind quickly wandered into realms of pre-1990 video games and science fiction film scoring.  The rolling drum sequences are sure to keep your head nodding on this one as the classically Atari-esque horn blows sounds off in melody.  I still haven’t been able to make out much of the sound-bit that was used but what I can say it is a vital component to the tracks synchronicity.

While maintaining a theme of brooding atmospheres and analog presence, the EP’s final track takes the energy down a bit.  The dissonant, ringing lo-fi pad that is heard throughout provides perfect contrast for the remaining elements of the tune, as they’re extremely dark.  This is the type of music that sends chills down your spine.

Have a listen below and make sure to go out purchase this release if you’re feeling it!

I’ll catch you next time. 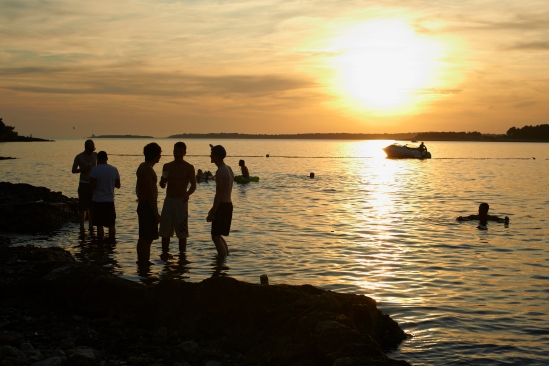 What up heads!  Hope everybody is pumped for the weekend, I’m amped as funk!  As the summertime vibes have been rolling in deep here in Cali’, I figured it was about time to start thinking about Outlook Festival.  This shit is the ILL, straight up.  After talking with artists, somehow, the statement “you NEED to get to Outlook Festival”, is always thrown at me.  Resident Advisor has said it’s “the best four days of bass in Europe, if not the world.”  Just from pictures alone, I get the chills about this place.  Then, after I hear all the stories from various people of what goes down, I get goosebumps the size of  grapes rolling up my spine!  That’d be a trippy sight, huh?  But seriously, this place is just unbelievable looking.  Same location as Dimensions Festival that we were talking about a couple weeks ago, the abandoned 18th century fort.  The scenery of this fort is breathtaking, crystal-blue water backed by silhouettes of the cliffs that line the shores, and oh yeah, don’t forget about the LAZERS broooooo.  Haha, shit is going to get weird.  According to the Outlook crew, there is only a limited number of tickets left, so jump on that if you’re trying to go.  As I’ve been browsing the web trying to find housing for the trip, things are filling up really fast (most places are already booked up!), so I don’t doubt that capacity is going to be reached relatively soon.

The artist lineup the year is absolutely unbelievable.  Name any style of soundsystem music, and it is represented at Outllook.  They just released the 3rd lineup wave sometime last week I think and it’s crazy to think about all the sick performances that will be going down in a single venue.  Digital Mystiks, Fat Freddy’s Drop, Phife, Kryptic Minds, Submotion Orchestra, Phaeleh, Dub Phizix, and on and on.  Check the image below for a more in-depth look at the lineup.

How nutty does that look?! ^  It’s going to be such an amazing experience to get out there.  Seriously, try to make it!  Below you will find a bunch of music from a few of the artists that will performing on the beach.  The mix from Zed Bias is straight FIRE.  Also, make sure you check out the track ‘Horizon’ from Tunnidge, it’s one of the hardest steppers anthems I’ve heard in a long long time.

Submotion Orchestra – It’s Not Me It’s You

BOOM!  That should be enough bass to hold you over for the weekend, so until next week…

Sup fam.  Can’t believe Wednesday’s almost over.  Life gets busy between work, music, and friends, and weeks seem to fly by.  One constant throughout it all is the relief you can find kicking back and listening to some new choons.  We got four gems for you today.  The first few are lurkers, real deep and proper, soundsystem tunes.  The last one is a completely different vibe, less dark, hopefully sending you out with some good vibes.

First one is from a producer named Murdok featuring JBZ.  I really like the intro as it builds up into a serious roller.

Next one is from OG’s Kryptic Minds.  As always these guys deliver maximum bassweight.  The tune titled The Talisman is set to come out on Tectonic Plates Vol. 3 on March 19.  Keep your ears ready for this compilation as it includes tracks from artists such as Tunnidge & Goth Trad.  Follow the link to Tectonic’s website where you can view the full tracklist.

The next tune comes from Gemmy titled Freq Factory.  Packed full of punchy bass and hard snapping snares this one will definitely hit your speaker box hard.

Last up we have a tune from a British producer named Calski.  I really like the vibes of this tune.  Not a party tune, no major bassweight element, but the feel of it is nice.

That’s a wrap.  Pay it forward when you can.

The weekend is finally here.  Time to bust out Grandpas cough syrup and get stepping!  Today’s music is a very eclectic mix.  The first track, hailing from one of the best producers of the past 2011 year, Kahn, is a remix of an extremely HARD track by Killa P & Badness.  Kahn puts his touch on it and turns into an absolute gangster anthem.  A bit different from Kahn’s typical purpley dance vibes, but it still captures the production talents that this guy has, no doubt.  Tunnidge holds the torch for this next tune.  A foundation-style approach on this one gives it longevity and class.  Somewhere amidst his time spent rendering artistic portrayals of those fortunate enough to get a release on Deep Medi, this long time contender has created another musical gem.  He’s about to embark on a tour over here on the west coast so make sure to check out the tour dates on his Facebook page so you can catch one of his shows!  He is stopping in San Francisco, so all the heads up north, DON”T MISS OUT!  Commodo put out another forthcoming tune just recently, and as you would expect, it’s a BANGER.  Commodo was the first artist we ever highlighted here at BWS, back when he was first signed on as a member of the Deep Medi family.  It’s been sometime since we’ve gotten wind of a tune that will see a release but, after hearing this tune it was definitely worth the wait.  The shuffle-ly drum sequence sets up nice for the rest of the tune.  The synth leads about halfway in are really sick, so hold tight.  Today, we thought there could be no better song to ease you into the weekend than one of Authors latest productions.  These two just cannot stop putting out top-notch music.  Some of the most soulful vibes accompanied by the cleanest mixdowns.  It’s really exciting when you imagine what these guys will be coming up with over the next year, because they are undoubtedly some of the most talented musicians on an individual level, and once they come together,  it’s like they’re the only ones with a gun at the knife fight.  Massive respect to Author, and if you somehow see this, COME TO THE STATES PLEASE!!!!!

Author – You Made Mistakes Too

That about wraps it up today.  Have a sick weekend and don’t be a gangster, dance like one!